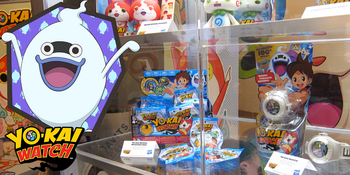 There have been several toys created as tie-ins between the various Yo-Kai Watch games and the Yo-Kai Watch anime. Hasbro is planning to release a US/worldwide toy line based on the series in 2016.[1][2][3]

Yo-kai Watch merchandise in the US is expected to drop near the beginning of 2016. Yo-kai Family HQ at the New York City Comicon stated that the merchandise will release in 2016, and the lineup will feature (amongst other things):

Bandai has released several official Yo-Kai Watch Dictionary files, known in Japan as Yokai Gerapostini. These bound volumes are meant for storing the Yo-Kai Medals within. There are also file add-on packs called Gerapo-plus. Each binder and add-on pack also comes with an exclusive yokai medal. They come in many colors and for various release lines of medals including brown, purple, yellow, and black. Each comes with clear pages with pockets suitable for holding medals and pages of information for various medals.

Yo-Kai Medals are collectible plastic disks in a variety of frame styles and colors depicting Yo-Kai. These can be inserted into the toy watch or into the Yo-Kai Pad. Each medal also includes a QR code on the back that you can use in-game to redeem gacha coins and other items and surprises! Each QR code is tradeable and usable once per game save, and each medal has a unique code even if you end up with a duplicate.

The Yo-Kai Watch is a toy variant of the titular watch. There are currently six watch variations in Japan, the original Yokai Watch, Fumika's necklace style Yokai Watch, the Zero-shiki Watch, the Prototype-U, and even newer U1 and U2 watches. Each watch is modeled after watches from the games and anime series. Yo-Kai Medals can be inserted into these watchs (compatibility will vary). The original watch toy was so popular upon release that the entire stock was sold out within two weeks.

The Yo-Kai Pad is a small device that reads Yo-Kai Medals, providing data instead of simply art like the Yo-Kai Watch.

Yo-Kai Watch has a collectible card game in the series. Each Yo-Kai is represented as a card with certain attack and defense characteristics, largely mirroring in-game stats.

There are a great deal of plush toys from the Yo-Kai Watch series, with characters like Jibanyan being quite popular.

Like many popular franchises in Japan, Yo-Kai Watch has spawned a wide range of home goods, including fans, bins, and puzzles. A sample of the kind of goods available can be found at various online stores.

Similar to home goods, clothing based on anime is very popular amongst youth in Japan. For this reason, a wide range of clothing items have been created for Yo-Kai Watch.

CoroCoro Comic and CoroCoro Ichiban are two monthly publications that serialize various manga chapters and report news about the games, toys, and anime.