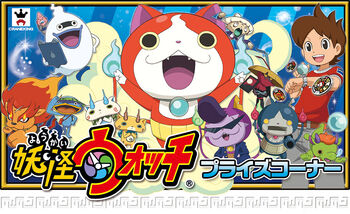 The Yo-Kai Watch Anime is the anime tie-in for the Yo-Kai range of games and toys.

Yo-Kai Watch is a children's anime series based on the video game of the same name developed by Level-5. The anime began broadcast on January 8, 2014, on TXN. Each episode is split into multiple parts similar to American children's cartoons. The anime is on going and has 76 episodes so far.

As of this writing, there are 76 episodes in the Yo-Kai Watch anime. More are slated to come, and will be added to our database as their release date passes. Check the Yo-Kai Watch Episode Database for a complete listing.

While the Yo-Kai Watch anime is primarily the story of Nathan Adams, many stories focus on Katie and her relationship with Nathan moving forward. Additionally, in the Yo-Kai Watch video game, the player can choose either Nathan or Katie as their player character. Nathan and Katie also have a cadre of classmates that feature heavily in the story, and whose roles evolve as the anime moves into the later episodes.

An exercise number at the end of the first 24t Yo-Kai Watch episodes has become somewhat of a cultural hit amongst Japanese viewers. The number, titled "Yo-Kai Exercise Number One" (Japanese: ようかい体操第一, Yōkai Taisō Dai-Ichi) takes the viewer through a kinesthetic-based exercise dance with various Yo-Kai characters dancing along to music. The song and dance has become very popular, especially amongst youth users of Nico Nico Douga, a YouTube-like video sharing service.

As of the current season, one movie has been released in the Yo-Kai series. The movie, titled "Yo-Kai Watch the Movie: The Secret is Create, Nyan!" (映画 妖怪ウォッチ 誕生の秘密だニャン！ Eiga Yōkai Wotchi: Tanjō no Himitsu da Nyan!) was released in Japan on December 20th, 2014. On August 20th, the dubbed version was released on fan-translation host mongeesubs.

Not all of the Yo-Kai appear in the show, but a good deal of them are slated for eventual featuretes. For a complete list of current Yo-Kai, including those released through cards and through the games, check out the Yo-Kai Database!